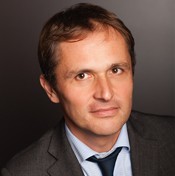 Guillaume Duchesne is Head of Equity Strategy at BNP Paribas Wealth Management. More specifically, he oversees the development of our sectoral strategy. Guillaume also has expertise in emerging markets, and regularly publishes articles and reports on his investment recommendations.

Guillaume holds a doctorate in economics and a certificate in management from the Vlerick School (Belgium). After working as an assistant at university, he continued his career as an economist at ING Investment Management (ING IM) in Brussels. He was then promoted as Head of Investment Allocation at ING, and was in charge of internal and external Asset Management communication in France. In this role, he appeared regularly on Bloomberg TV and in the written media.

Guillaume then joined the private bank MeesPierson (Fortis Group) in  Luxembourg, and subsequently in Geneva, where he was Head of Equity for the group.

Following the consolidation of Fortis bank and BNP Paribas Group at the end of 2009, Guillaume joined the investment strategy teams. He is currently based in Luxembourg.