Are US Equities Really Overvalued?

Following the recent good stock performance, US equities look expensive. But what about other components in US indices?

At the end of September the S&P 500 index hit record levels, so logically valuations are also at a record high. According to the Shiller valuation ratio, created by Nobel Prize Winner, Robert Shiller, (1) US equities in the S&P 500 are trading at a P/E of 30 and a 15-year high. Although we are a long way off the euphoria in the 2000s when P/E averaged 45, this high valuation, in our view, is limiting the upside potential of US indices. At these levels, the US market needs to take a breather. Announcements from the US Federal Reserve—and as a result, movements on interest rates and the dollar—might trigger renewed volatility in the short term, leading to a consolidation in US indices.

Based on Robert Shiller’s valuation criteria, what are the most risky sectors? The table below shows a wide American index (Datastream) by industry. 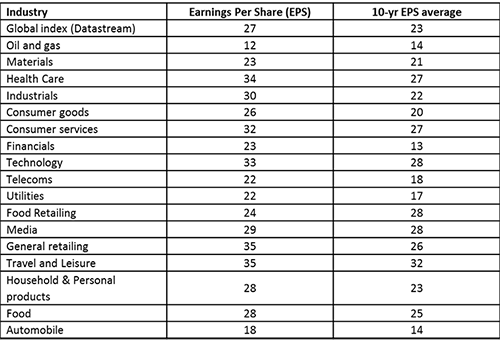 The conclusions are the following:

On the basis of valuations and at the present stage of the economic and financial cycle, it is difficult to give clear sector preferences for the US stock markets. Therefore, we have reduced our positions in a number of sectors (banks, consumer discretionary and technology) in recent months. Nevertheless, we continue to like i) energy stocks which are riding the wave of rising oil prices, and ii) pharmaceuticals (solid growth) which have followed an upward trend since the election of Donald Trump.

(1)     The twofold advantage of Robert Shiller’s calculation technique is that it focuses on past profitability of companies (rather than on analyst estimates, which can be unreliable) and spreads it over the long term. This technique gives a more objective long-term valuation ratio.