A sudden change in fortune

It is the season when everything that glitters puts people in a good mood. Not participating to this seasonal festival of lights however, is gold. Until November 8, it seemed that gold would also join the party; it was up 20% since the beginning of the year.

Since then, it has lost 11% and is now up only 7% year-to-date. The sudden change in fortune came with the election of Donald Trump. Within a few days of the news that he would be the next President of the United States bond yields jumped (from 1.85% to 2.26%) and the dollar rose 2% on a trade-weighted basis.

These new trends have continued since then. To be more precise, these abrupt movements had been preceded by slow moves in the same direction since the middle of August, as investors became increasingly convinced that the global economic outlook was improving.

In absence of significant evolutions on the gold supply side - either from scrap supply or from mine production - or on the demand side, be it jewellery-based (demonetization in India does not seem to have hurt import demand) or from central banks, investor behavior is the primary driver of the gold price. The latter is thus mostly dependent on variations in risk aversion/appetite and on trends in real yields, which determine the opportunity cost of holding gold.

The gold price is primarily dependent on variations in real yields 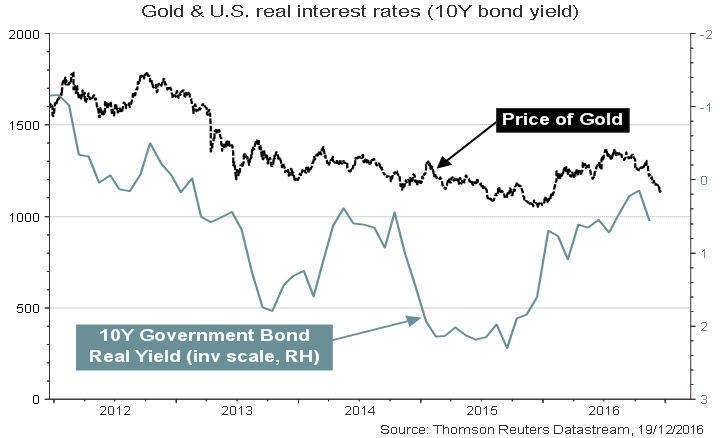 Gold has recently been the victim of improving animal spirits, with hopes that budgetary stimulus will take over from monetary policies to sustain economic activity.

Several Fed rate hikes lie ahead as growth prospects are good, leading to rising bond yields and to a strong dollar.

The consequence has been gold ETF outflows and liquidation from speculators. The major risk going forward is if we were heading towards a structural break from the low rates regime that we experienced over the last few years. We do not believe so.

We have a favourable view of the global economic outlook over the foreseeable future. Because of structural constraints such as a decline in the working age population, poor productivity trends, need to deleverage and lack of dynamism in final demand, the rate of expansion of the global economy will remain closer to 3% than to 4%. As a result, monetary conditions will remain benign. The Federal Reserve is expected to bring its Fed fund rate to only 2% by the end of 2018 and other major central banks will keep their expansionary policies in place at least until the end of 2017.

Bond yields should then rise only moderately. We expect the 10-year Treasury yield to stand below 3% at the end of next year and the 10-year Bund below 1%. As inflation rises in the meantime, mainly due to a base effect related to the rise in commodity prices but also to rising wage pressures in the US, real yields are expected to stay at relatively low levels. The opportunity cost of holding gold will thus remain low. In a world where any grain of sand could easily grip the growth outlook, this should support investor demand for gold, as a hedge.

The bottom line is that over the next few quarters gold should have room to rise again, based on fundamentals. In addition, given the presence of several political risks, such as elections or protectionism, as well as geopolitical risks, gold should effectively be able to glitter again.