Investing in Farmland: How Did the Market Perform in 2016?

Prices are still rising, although profitability of farms has been falling for three years

In 2016, the average price per hectare of farmland was €6,035, compared with €5,835 in 2015. Land prices continued to rise in 2016 (+3.4% versus 2015), but at a slower pace than in the previous ten years (+5% per annum). This trend should be put into perspective in light of the drop in the price of agricultural products and revenue. Nonetheless, farmland in France is still less expensive than the European average. As such, the number of years needed to reimburse a hectare of land is lower in France than in other European countries. On average, it takes six years of added value to reimburse a hectare of land in France, compared with 20 in England and Wales, for example. 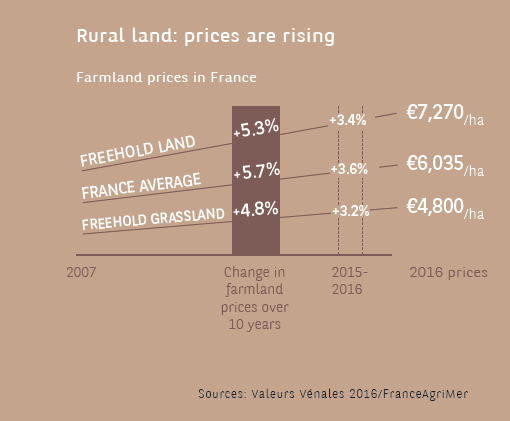 The price hierarchy between the various production systems remains unchanged: the average price paid for arable land is €7,270 per hectare, while for mixed crop-grazing areas it is €4,800 per hectare. This represents around 17% above the national average. In 2016 prices rose slightly faster for arable land (+3.6% y/y), than for grazing areas (+3.2% y/y). At the top end, the best grain-growing areas are the most expensive, at more than €15,000, or even €20,000 per hectare. Among these are the Hauts de France region, which includes Nord Pas de Calais, Santerre, Champagne Crayeuse and Saint Quentin, and parts of southern France, such as the Crau and Durance Valley. At the bottom end, the cheapest land fetches between €2,500 and €3,000 per hectare, for example, in Mayenne, Jura or Morvan.

The average price for leased land is €4,950 per hectare, around 18% less than freehold land. This represents an increase of 3.2% on 2015, for both leased farmland and grassland. In 2016, the average farm rent was €169 per hectare. Compared with the price of leased land, the average gross rental yield was 3.4% in 2016. Depending on the region and type of land, the average gross yield fluctuated between 3.1% for arable land and 3.9% for grassland in 2016. Although the farm rent index fell for the first time in six years, investment in farmland is still attractive in the current economic environment. Over the last ten years, rents have grown by 2.4% on average, and there are very few départements where the return on leased land is below 2.5%.

For the in-depth analysis, read the 2017 Agrifrance Report