The dollar was quite volatile recently. A higher budget deficit and a lower interest rate differential suggest a weaker dollar.

The last 30 days have seen the euro trying to break to the upside. In December, the weakening of the USD has occurred alongside the slowing of the US growth. Moreover, the more dovish Fed guideline calling for patience and less urgency for rate hikes. On the Eurozone side, the end of the QE should imply a decline of portfolio outflows, supporting the EUR. Furthermore, the confirmation of the Italian 2019 budget agreement has lowered the pressure on the euro. The current renewed euro weakness should be temporary. The overvalued U.S dollar compared to its long-term fair value suggests that the EURUSD should converge to our 12-month target at 1.22. We target EURUSD at 1.16 in 3 months.

The pound seems resilient following the successful PM May confidence vote. This comes after her large defeat on the Brexit vote deal on January 15. Our base case scenario is an extension of the Article 50 while a second referendum is also possible. This should increase the likelihood of a Brexit reversal and strengthen the British pound. Given the current uncertainty, we keep our 3-month target at 0.90 (value of 1 euro). Over the longer-run, we remain supportive on the GBP as the odds of a no-deal Brexit are small and markets seem to have priced the uncertain economic outlook. We target EURGBP at 0.88 over a 12 month horizon.

The yen, a typical safe haven asset, has appreciated over the period of risk-off sentiment and the declining U.S dollar witnessed in the second part of December. We keep our 3-month target at 110 (value for 1 dollar). While the Bank of Japan does not expect to implement a policy normalisation underway elsewhere in G10 countries and U.S bond yields should remain quite stable, the bond yield differential should not have a major impact on the JPY. The slowing portfolio outflows due to Japanese investors becoming more cautious regarding their US asset exposure, should continue to support the yen medium-term. In this context, we review our 12-month forecast to 106 from 108.

The Central Bank should not hike its target rate over the upcoming year. The inflation for December was slightly down (1.9% from 2.1%) but remains close to the central bank target. The relative monetary policy convergence given the possible slowdown of the US rate hike path. An escalation of trade tensions should weigh on the Chinese growth outlook. This should maintain the “Aussie” currency under pressure. We forecast the AUD at 0.78 in 12 months.

Economic growth should remain well oriented in 2019. The inflation has increased more than expected in December and inflation should remain around the target. So far, markets did not price a rise of the Central Bank target rate in 2019, in line with market expectations for Fed rates. The likely weakening dollar path should support the NZD. However, even though dairy prices have undertaken a strong start in 2019, European political uncertainty and ongoing trade tensions could affect the outlook for milk products. Given the unforeseen trade war issue, we assume the 12-months target at 0.70. 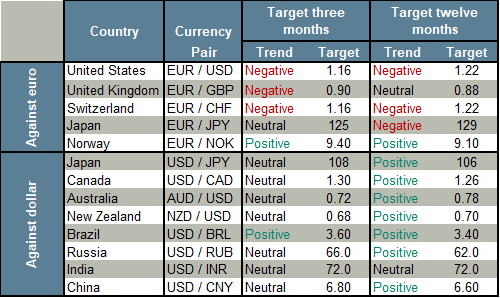