Outlook for Switzerland: a back-to-school review

Economic activity is well oriented, backed by the sound health of the world economy, strong competitiveness and a weaker currency. Swiss stocks being defensive, they should rise more moderately than the MSCI World. For the long term, they remain excellent quality investments.

Over the last 10 years, the Swiss franc rose by approximately 50% in trade-weighted terms. Such strength is widely believed to have hurt economic activity. In the end, the performance of the Swiss economy has been quite resilient with an average pace of growth of 1.6% over this period, even though there was a 2.1% recession in 2009. The main impact was on inflation, which was on average 0%. Looking at GDP components, consumption remained solid thanks to immigration, investment spending grew appreciably and exports proved resilient, even after January 2015 when the Swiss National Bank (SNB) abandoned its foreign exchange rate floor.

The outlook is good. The manufacturing PMI index stands at a new cycle peak of 60.9, the KOF leading indicator points to solid growth with improvements in exports and tourism (already announced before the recent weakening of the franc). The country is well positioned to take advantage of the good euro area growth prospects as more than 50% of exports go to the EU. All in all, 2017 GDP growth of 1.4% seems a reasonable expectation and next year it should rise in line with the long-term sustainable growth rate of 1.7%, helped by a weaker franc.

The Swiss National Bank will be in no hurry

All the efforts of the SNB tend towards fighting a strong franc. Its policy has two pillars: negative interest rates of -0.75% on sight deposits and interventions in the foreign exchange markets if necessary. Starting in the second half of April, the Swiss franc began losing ground, as a reflection of a declining political risk premium in the Eurozone. Late in July, the decline accelerated after an interview of Thomas Jordan, the SNB’s President of the Governing Board, in which he confirmed his view that the Swiss franc remained “significantly overvalued”. As technical resistances were overcome, the move towards EURCHF 1.15 accelerated.

For the foreseeable future, we do not expect the currency to deviate much from current levels despite the appetite of the SNB for a much weaker currency and a purchasing power parity standing at 1.23 against the dollar (current exchange rate: 0.9660). The main factors supporting a strong franc are the sizeable trade and current account surpluses as well as the persistence of structural issues for the world economy, which will keep alive demand for safe havens. As a result, the SNB will remain very accommodative for a very long time. It will wait longer than the ECB for initiating tightening moves. This means that nothing will be attempted before 2019 because the ECB will, in our view, lift the deposit rate closer to zero in September 2018 at the earliest and the refi rate will not be adjusted before the end of 2018. Prior to making these changes, the ECB will want to reduce its asset purchases. It is very likely that such an announcement is made in September coupled with an intention of ending QE by the middle of 2018. The SNB will thus not make any move for at least 15 to 18 months.

If the outlook for the Swiss economy is solid and the SNB retains its extreme accommodation for the foreseeable future, then Swiss equities should have a bright future, right? From a directional perspective yes! Particularly as the recent weakening of the franc benefits sales and earnings, both of which are generated mostly outside the country. The structure of the market will however limit the upside potential. The Swiss stock market has the most defensive structure among the markets that we follow. 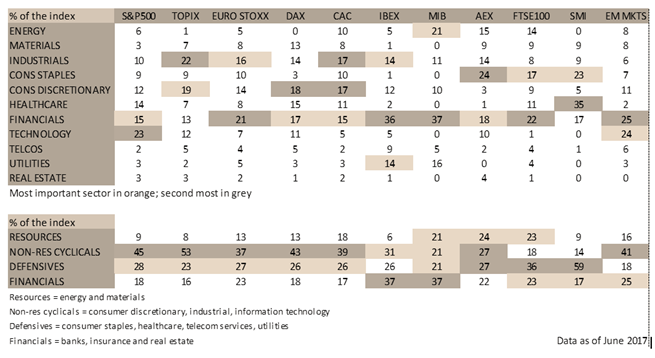 At a time when the world economy is well oriented and investors are likely to progressively abandon their cautious approach to equities, the most defensive markets are going to be the least attractive to them; they will look for the most pro-cyclical ones (the euro area and Japan). This should result in underperformance of Swiss stocks. 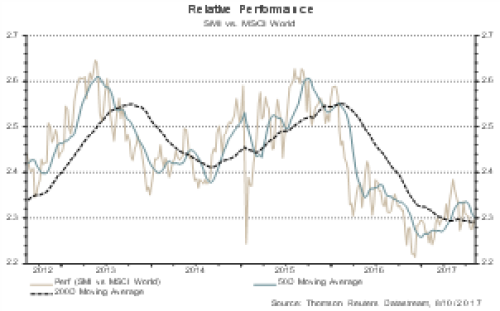 Valuations support this stance. For example, the forward PE is nearly 18 times versus a long-term average of 15.6 times, the relative PE to the MSCI World is expensive at a 20% premium and the price-to-book stands at 2.5 times compared to a long-term average of 2.2 times. Given that the return on equity is below the long-term average, valuation is therefore an additional constraint on the upside of Swiss stocks.

Investors with a long horizon can however without hesitating retain their interest in Swiss stocks as the latter offer high quality and their dividend yield is attractive. It is 3% compared to 2.5% for the MSCI World. For Swiss-franc based investors, the attraction of Swiss stocks is clear with a risk premium of 5% and the prospect for yields to stay low for a considerable period of time.