Beyond the next three months, within which we expect equity markets to consolidate after a 16% rise over the last 12 months, the bull market should continue.

The US stock market should keep reaching new record highs but animal spirits are likely to favour the pro-cyclical ones, i.e. the euro area and Japan.

With the S&P500 reaching new record highs recently, many investors are becoming increasingly anxious about valuations. Clearly the latter are high in historical comparisons, whether looking at PEs, in their several different declinations (median, cyclically-adjusted, trailing or prospective) or at price-to-sales, price-to-book ratios… But valuations are a poor indicator of trends within a 12-15 month horizon; they help though gauging the potential amplitude of price movements.

The most important drivers at this advanced stage in the bull market are macro and corporate fundamentals. If they are good or improving, which we believe, then high valuations can stay very well supported. With 5% revenue growth, earnings growth of 8% seems to us a reasonable expectation, thanks to operational leverage, positive contributions from the energy and financial sectors and despite rising pressures on margins from faster wage growth; more could be possible depending on fiscal measures. Based on these considerations, we see room for further new record highs being reached beyond the short term. The upside in percentage terms becomes however limited because of valuations, the prospect of several Fed rate hikes in the next 12-15 months and the present overbought conditions. 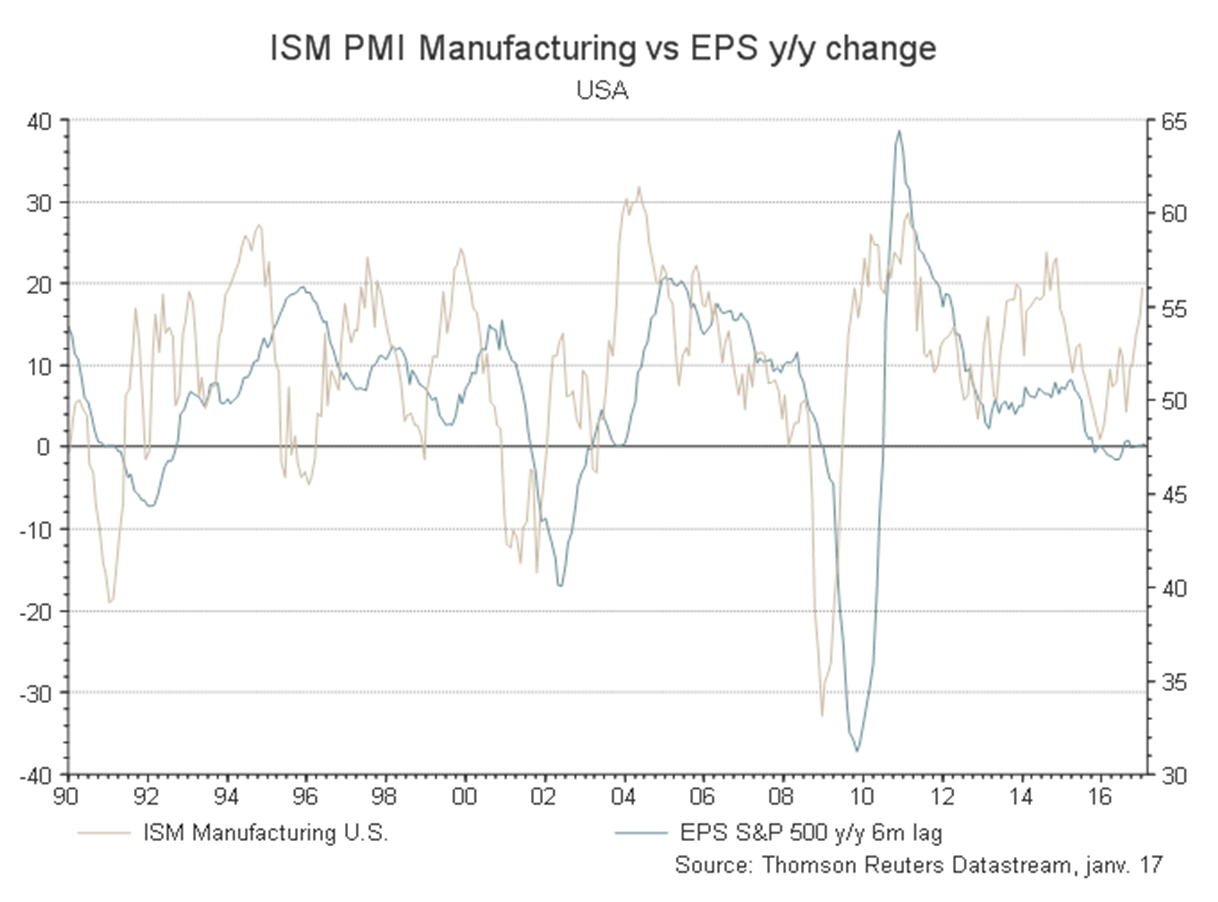 Despite very strong leading indicators, favourable sales and earnings trends, euro area stocks remain disappointing. We think the explanation lies with the heavy political agenda within the area in 2017 and the strong support that populist parties enjoy. We expect that investor fears will prove exaggerated and that fundamentals should progressively reassert themselves.

The earnings season has delivered favourable signals with two-thirds of companies delivering better than expected sales numbers and half of companies bringing earnings results better than expected. This is noteworthy as, for a change, consensus expectations had not been revised down prior to entering the earnings season. The earnings momentum should improve going forward given the high sensitivity of the bottom line to a small improvement in the top line. In addition to this operational leverage, earnings at the market level should take advantage from the positive reversal in prospects for the commodity and financial sectors. Share buyback activity could strengthen, having lagged compared to the US and Japan.

The combination of a favourable earnings outlook with attractive valuations (CAPE, P/B, dividend yields and relative to bonds) should allow euro area stock markets to deliver above average returns. 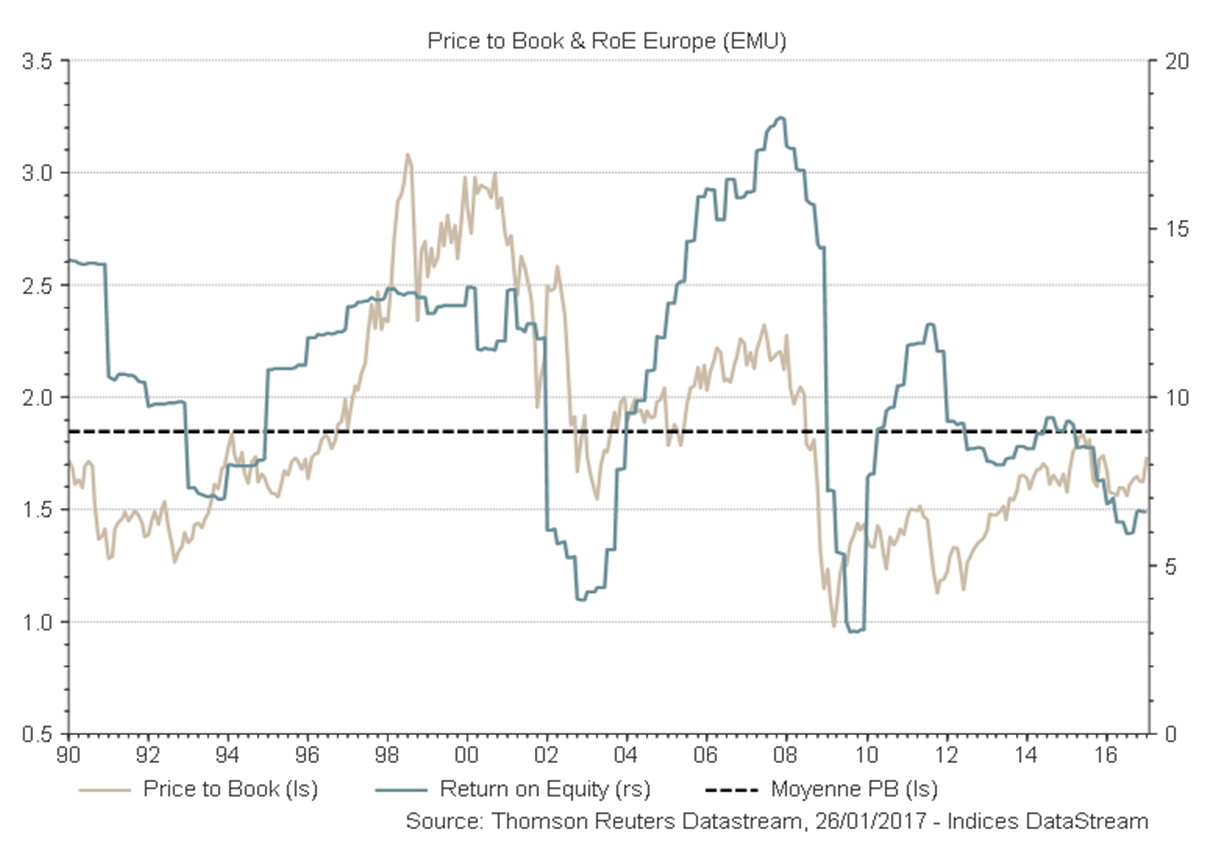 A recovery in the ROE gives room for revaluation

Because Germany benefits from monetary conditions too accommodative for its own fundamentals, domestic demand trends are solid. Given its high cyclicality and exposure to emerging countries, this is a market that should keep outperforming within the area. Its valuation is attractive (but it is true that it appears so thanks to the solid rise in earnings seen over the last few years).

The resiliency shown by the UK since the Brexit vote gives way to a progressive slowdown in domestic demand. PMIs have begun to deteriorate, retail sales are negatively impacted by higher inflation and the Brexit uncertainties affect investment plans. Theresa May is expected to invoke Article 50 of the Lisbon Treaty this month, thereby triggering the EU exit process. These are developments that will weigh first of all on domestic sectors.

The financial sector will also be an important sector to suffer from the Brexit uncertainties. The one area that benefits from uncertainties is exporters, through the weakening of the pound. More than 70% of sales of UK companies are generated outside the country so one could argue that this renders the UK stock market highly attractive given that the currency has lost more than 15% on a trade-weighted basis since the beginning of 2016 but sectors such as industrials or materials already reflect this competitiveness gain. In addition, going forward, we see the currency recouping some of the ground lost.

Finally, the defensive character of the UK stock market is not a trump card at a time when investor appetite for markets taking advantage of global reflation is rising. Fortunately, thanks to a 4% dividend yield and a moderate price-to-book ratio, UK stocks are well supported. The upshot is that UK stocks have only limited upside potential in 2017. We stay neutral.

Because Germany benefits from monetary conditions too accommodative for its own fundamentals, domestic demand trends are solid. Given its high cyclicality and exposure to emerging countries, this is a market that should keep outperforming within the area. Its valuation is attractive (but it is true that it appears so thanks to the solid rise in earnings seen over the last few years).

Earnings in 2017 are expected to grow again, after two years of negative outcomes, which are mostly the consequence of the abolition on January 15, 2015 of the minimum exchange rate. Recent releases of leading indicators show a fast acceleration on the upside: the manufacturing PMI is back to levels that prevailed in May 2011 and the KOF indicator has reached a level last seen at the end of 2013. With 60% of exports going to the members of the European Union the outlook for exports is also promising.

What retains us from seeing the Swiss stock market with outperformance potential is its structure. It is very defensive and therefore earnings dynamism is below par. At a time when bond yields are on a rising trend and with investor risk appetite likely to expand, the Swiss large caps are likely to be neglected. In terms of valuations, the PE and price-to-book ratio are around their long-term averages; the best support of large caps is their dividend yield of 3.3%. Mid-caps however remain attractive, thanks to the global reflation trade, stronger earnings growth potential, solid balance sheets and reasonable valuations. Our bottom line is to be neutral on large caps and positive on mid-caps.

The macro background is currently quite supportive with leading indicators pointing to better economic activity in coming months and positive economic surprises jumping towards levels that last prevailed in 2009, which raises the question of the timing of a reversal. By mid-year, activity could be cooling as the impact on export growth from higher levels of commodity prices fades and positive base effects vanish, China’s housing sector slows down (and auto sales suffer from a hike in the purchase tax) and higher Fed funds rate/bond yields weigh. Overall however, the trend is for accelerating growth in 2017, and in 2018. Better revenue growth should allow improvement in the ROE, which has stabilised since the middle of 2016, after five years of decline. Earnings growth is strong thanks to commodity sectors, particularly materials, but going forward, it will increasingly be better revenue growth overall that will feed continuation of a positive trend.

These prospects are accompanied by valuation ratios marginally below their long-term averages. Emerging markets have thus the potential to deliver returns similar to those expected from developed markets. Due to the tendency of the former to underperform when the Federal Reserve raises interest rates, when the dollar strengthens and when bond yields rise and given the high level of uncertainty on the course of US trade policies, we retain for the time being our neutral stance. Overbought conditions also support this stance. Our preference for Asia remains, where there are growth stories such as India, beneficiaries of good demand trends in developed countries and where China is attractive from a long-term perspective.